Light has a dual nature and can behave as a wave and a particle. In the 19th century, Thomas Young’s two-slit experiment showed that a screen projection of light has interference patterns if it passes through two slits, displaying wave-like characteristics.

Thin-film interference also supports the view that light can behave as a wave. In this article, the thin-film team at Korvus Technology explains this phenomenon.

What Is Thin-Film Interference?

The remainder of the light enters the film. When this portion of the light strikes the bottom surface of the film, the second wave reflects and can emerge from the top layer to interfere with the first wave.

The factors that affect the type of interference include the film thickness, refractive indices, and light wavelength.

Constructive interference occurs when two light waves reflecting from the film surfaces are in phase, which means their peaks and troughs line up.

When looking at a constructive waves diagram, you will notice that when two waves are in phase, their oscillations are in the same direction at any given point. The resulting wave’s amplitude equals the sum of the individual waves’ amplitudes.

Destructive interference occurs when the two reflected light waves are out of phase by 180 degrees and their oscillations are in opposite directions at any given point.

A destructive waves diagram shows how the phase difference between the two reflected waves causes them to cancel each other out.

How To Determine If Thin-Film Interference Is Constructive or Destructive?

The optical path length difference is the thickness of the film times two, as the second wave needs to travel to the film’s bottom surface and back. The minimum film thickness required for constructive interference is less than a wavelength and depends on whether a phase shift occurs at the upper air film interface.[3]

The Optical Properties of Thin Films: The Soap Film Experiment

This experiment demonstrates the light interference of thin films and involves suspending a soap film vertically on a circular frame with a 19-centimetre diameter. An oil film on water is also a suitable film medium for this experiment.

In monochromatic light, the interference produces a diffraction pattern of white light in the form of bright and dark bands.

This experiment demonstrates the effect of a film’s thickness. Producing constructive interference is possible toward the bottom of the frame, where the film’s thickness increases.

Here, the path length difference and phase shift between reflections from the upper and lower film air interface are relatively high, resulting in a more intense visible wavelength.

How Does a Soap Bubble Make Colours? 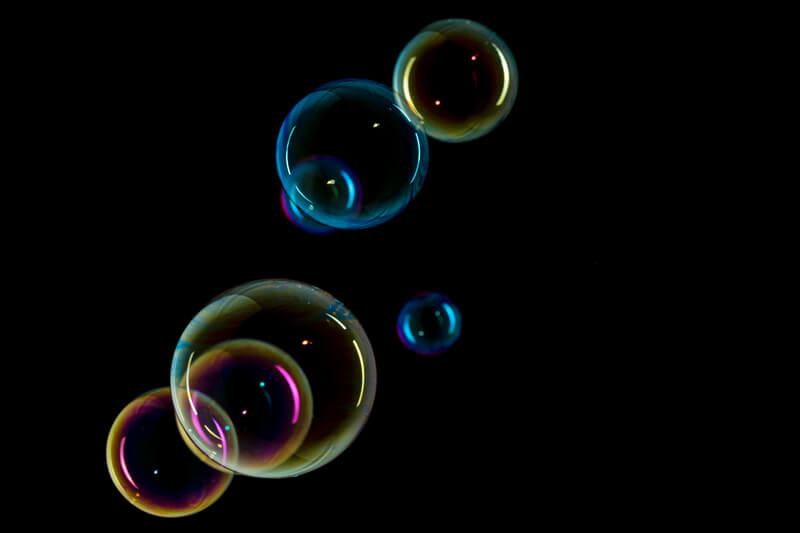 The soap film demonstration is the best way to explain the phenomenon of interference in thin films.

A white light incident on a soap film consists of various colours. Each colour corresponds with a specific wavelength.

Where the waves obtain destructive interference, the film is transparent. However, the pure wavelength light is at its brightest when the waves are in phase.

Where the film thickness equals the wavelength of the light incident perpendicular to the film, the effect is most prominent. The colours in areas of constructive interference repeat, and each spectrum looks like a rainbow.

Thin-film wave interference has a wide application range, with optic instrument manufacturing being the most significant.[4] Manufacturers use the principles of electromagnetic interference (EMI) power, such as the two-beam interference equation, to design and produce mirrors, optical filters, and non-reflective coatings.

A diffraction grating security feature is another prominent thin-film application and prevents the forgery of banknotes, credit cards, and driving licenses. Australia was one of the first countries to print a polymer-based dollar bill that contains an optically variable device, or OVD, which is a diffraction grating.

Such a coating material generally has a lower index of refraction than glass, causing a 180-degree phase shift. No light reflects from this lens when light rays incident perpendicularly to the top surface.

Anti-glare sunglass manufacturers place non-reflective coatings on their products’ lenses. These coatings eliminate the glare from sunlight, reducing eye strain and headaches. Non-reflective sunglasses don’t reflect the light from a camera flash or lighting, either, which improves the wearer’s appearance.

Studying thin-film interference allows for the analysis of a film relative to its index of refraction and optical thickness, which makes optical medium comparisons possible. Understanding this phenomenon is integral to the design and production of anti-reflection coatings and optical instruments.

Browse our blog at Korvus Technology to learn more about thin-film technology.